Jacobs Supports NASA in Hitting Major Milestone for Artemis I

DALLAS, July 8, 2020 /PRNewswire/ -- Jacobs (NYSE:J) and NASA's Exploration Ground Systems Program recently achieved a major milestone at Kennedy Space Center (KSC) as the motor segments of the Solid Rocket Boosters (SRB) arrived by rail at KSC in Florida on June 15, 2020. The twin SRBs are part of NASA's Space Launch System (SLS), which will be used to send humans to the moon, Mars and beyond. 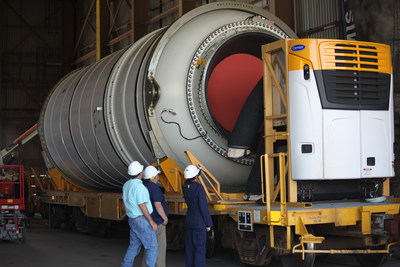 This milestone represents a critical step in NASA's preparations for Artemis I, which will be the first in a series of increasingly complex missions that will extend the frontiers of human deep space exploration. Scheduled to launch in 2021, Artemis will be the first launch of SLS and Orion, the backbone of America's deep space exploration program.

"The arrival of the SRB components means we are getting very close to the stacking of flight hardware in the iconic Vehicle Assembly Building (VAB) at KSC," said Jacobs Critical Mission Solutions Senior Vice President Steve Arnette. "Once our team has conducted final inspections, processing and mating of the SRB segments, they will transport everything to the VAB for stacking to begin."

The Jacobs team, which handles final checkout and integration of all flight hardware for Artemis I, received the SRB hardware from Northrup Grumman (NG). The segments, filled with solid propellant, were manufactured by NG in Utah. Several forward and aft SRB components are assembled at an NG facility at KSC and will also be transferred to Jacobs for integration.

Each SRB contains five solid fuel segments (one more than the Space Shuttle Program), and each will provide 3,600,000 pounds of maximum thrust, helping to make the SLS the most powerful rocket on earth. The SRBs stand 177 feet tall and will be the first flight element to be stacked on the mobile launcher later this year.

In the Rotation, Processing and Surge Facility (RPSF) at KSC, Jacobs will inspect and conduct final processing, such as installing sensors on the motor segments, then transfer them to storage. The aft motor segments will be mated with the aft skirts and aft exit cones in build-up stands in the RPSF, to form the aft assembly for each SRB. Once completed, the Aft Assemblies will be the first component of flight hardware to be stacked on the mobile launcher. Once all the SRB components are moved to the VAB and mated to the stack, then the SLS core stage rocket will be lowered onto the mobile launcher, between the SRBs.

In addition, Jacobs was recently selected by NASA as KSC's Large Business Prime Contractor of the Year for 2019. At KSC Jacobs is prime contractor for NASA's Test and Operations Support Contract.

At Jacobs, we're challenging today to reinvent tomorrow by solving the world's most critical problems for thriving cities, resilient environments, mission-critical outcomes, operational advancement, scientific discovery and cutting-edge manufacturing, turning abstract ideas into realities that transform the world for good. With $13 billion in revenue and a talent force of more than 55,000, Jacobs provides a full spectrum of professional services including consulting, technical, scientific and project delivery for the government and private sector. Visit jacobs.com and connect with Jacobs on Facebook, Instagram, LinkedIn and Twitter.